The ABCs of gut bacteria 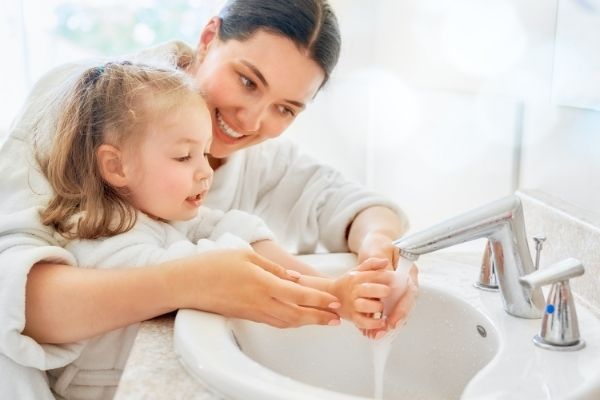 Some people think of microbes and shudder. After all many of us are brought up to believe that microbes are bad for you. We’re taught at an early age to wash our hands after the bathroom and cover our mouths when we cough so that we don’t catch microbes nor spread them to other people. Yet microbes, which often get a bad name, can actually be very helpful for you. In the case of gut bacteria, they are really important and influence our risk of developing certain diseases such as allergies.

I will at this point quickly mention that you’ll often hear that there are 10 times the number of bacteria in our body than there are human cells.

This is probably not the case as recent research reveals that the ratio is almost 1:1. An ‘average’ man weighing 70 kgs with a height of 1.7 metres is estimated to have 40 trillion bacteria rather than the often quoted 100 trillion bacteria. The total mass of bacteria is now thought to be 0.2 kilograms as opposed to 2 kilograms. The majority of bacteria will reside in the gut.

In order to better understand gut bacteria we should cover the way that they’re classified. This will help you understand the content of many articles especially if they start spouting off different bacterial names.

In 1753 a Swedish biologist Carl Linnaeus came up with an innovative system for classifying and naming plants and animals. Linnaeus is considered the father of taxonomy, which is that branch of natural science concerned with classifying living things. He classified living things by looking for similarities such as comparing teeth or grasping hands in mammals to see if they were related. In 1737 Linnaeus published the tome Systema Naturae (System of Nature) which was the first documented attempt to classify the world’s life forms.  Eventually, by the 12th edition, the tome grew to over 2400 pages.

We still use the Linnaen taxonomy to classifying living things although it has changed substantially from Linnaeus’s time. Figure 1 shows the Tree of Life. 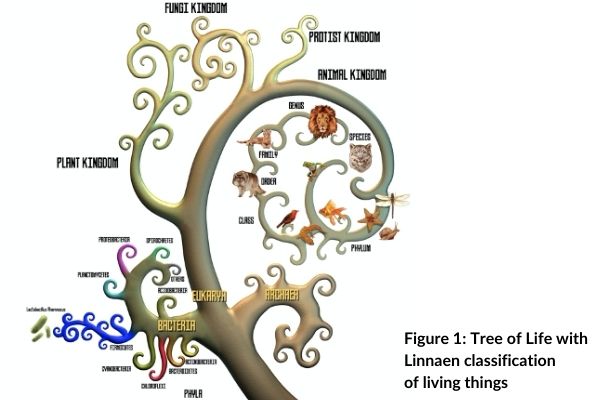 The main trunk of that tree divides into 3 domains that encompass all living things in the world. These domains are Bacteria, Archaea, and Eukarya. Eukarya covers all organisms that have DNA contained within a nucleus.  A nucleus is the round structure inside a cell that contains the majority of its genetic material. Bacteria and Archaea on the other hand are single celled microbes that don’t have DNA contained within a nucleus. Bacteria and Archaea were once thought to be very similar but now we regard Archaea as distinctly different to Bacteria.

The domain Eukarya has 4 kingdoms. These are the Animal Kingdom, Plant Kingdom, Fungi Kingdom

and Protist Kingdom. The first 3 Kingdoms make sense but the last Kingdom of Protists is a bit strange and often regarded as the “odd one out” that doesn’t exactly fit with the other Kingdoms. Protists include organisms such as slime moulds, amoeba and algae.

In our Tree of Life, we will use an example of the rare and beautiful Snow Leopard to show you how the Linnaean classification works. The animal kingdom is split into multiple broad groups called phyla (singular is phylum). A good example of a phylum in the Animal Kingdom is Arthropoda which covers all insects, spiders and crustaceans. The snow leopard belongs to the phylum Chordata which refers to animals that have backbones.

A class is the next level down from phylum. The snow leopard belongs to the class Mammalia which refers to a group of animals with backbones that nourish their young with milk from special mammary glands of the mother. The next rung below class is order. The snow leopard falls under the order Carnivora which means “flesh devourers” in Latin. There are 16 families in the order Carnivora and one of them is the cat family Felidae.

On our Tree of Life you can see how the big branch of bacteria splits off to a number of smaller branches. These are all bacterial phyla. Some important phyla that you will read about in research articles include Firmicutes, Bacteroidetes, Actinobacter and Proteobacter. When a research article discusses phyla and species, it is worthwhile finding out in which bacterial phyla the species falls under. You can quickly out from Wikipedia that Lactobacilllus rhamnosus sits in the Firmicutes phylum. 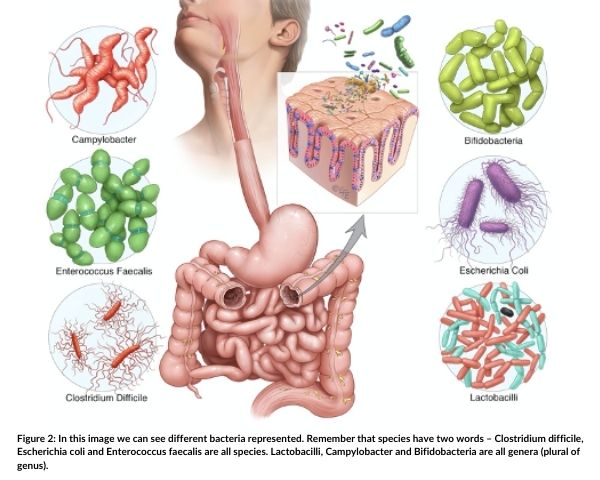 In the large intestine (colon) of healthy adults the two most dominant phyla are Firmicutes and Bacteroidetes. These two phyla account more than 90% of the total microbiota! In other Gut Dr articles we’ll be discussing the importance of particular gut bacteria phyla and how some research has found linkages between phyla such as Firmicutes and certain health conditions like obesity. 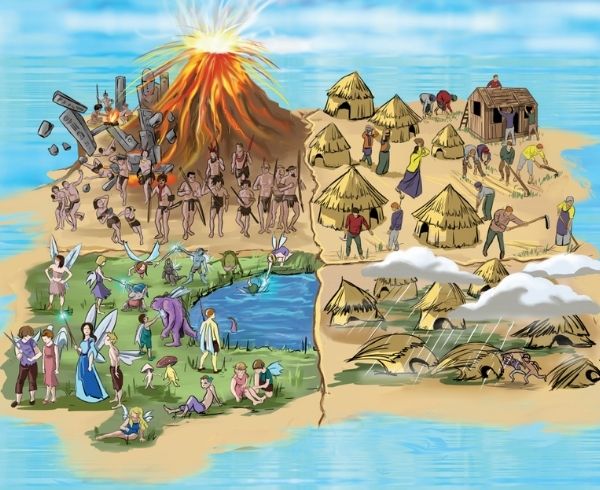 Gut bacteria thrive in their ecosystems through a number of rules. This is best illustrated with the concept of an island that can be viewed as an individual human’s gut. See Figure 3.

This island is considered virtually uninhabited and pristine in reference to newborn babies and thus first microbial settlers do have a lot of choice about how they choose to develop their population on the island.

In Figure 3 we can see four quadrants to the island which illustrate the different rules that are at work to help shape the growth and diversity of the inhabitants. The inhabitants are analogous to gut microbes and each quadrant represents an ecological niche.

On the top right hand corner we have the process of dispersal where is a natural increase in the diversity of the inhabitants. The settlers as you can see are diversifying their function – some are planting whilst others are building. These settlers not only are diversifying their function but intend to keep expanding their settlement outwards, looking to gain other ecological niches.

The bottom right hand corner shows the power of environmental selection where the growth of the inhabitants is dictated by the host environment.  If the island has stormy climate with monsoon rains this may well be detrimental to the development of the settlement.

The bottom left hand corner shows the process of local diversification. Here bacteria are able to pass their genes along to other bacteria living in the same ecological niche often through a process of mutation. This process ends up transforming them. We see some fairies magically conferring fairy wings to some goblins living in the same area. The transformed winged goblins may gain a competitive advantage over non-winged goblins.

The top left hand corner illustrates the process of ecological drift, which is where the population of species fluctuates randomly until some sentinel event comes along. In the case of gut bacteria this might be the introduction of antibiotics that can wipe out some bacterial species. In the illustration we can see that a volcanic explosion has wiped out an advanced civilisation leaving a primitive tribe that survived the explosion to populate.

Once the colonists on the island settle and migrate to the core of the island where there is shelter, water source and food they become a “core set” of inhabitants. There may be transient colonists who arrive from abroad and then disappear after a while but the core inhabitants remain and the island then becomes their homeland. This is what happens with our gut bacteria. We have a core set of gut bacteria residents and transient gut bacteria.