A short journey into the gut

The gut is amazing! Not only does the breakdown or digestion of food take place in the gut but the absorption of nutrients for the body is carried out by the gut. In order for efficient absorption to take place the gut is extremely folded.

If we can fully unfold the adult gut and lay it out in a flat sheet it would have the same surface area as a tennis court.

Not only does the gut have to be efficient but it has to be durable. Over a normal lifetime around 60 tonnes of food and drink passes through the gut.

This elaborate folding first begins at the embryo stage. Through a complex set of folding and rotational manoeuvres the simplest of structures (a flat disc) can transform into the most exquisite 3 dimensional structures. It is organ origami of the highest order.

Let’s cover what makes up the gut or gastrointestinal tract. Figure 1 shows a cross section of the gut and we can see first off that it is a hollow tube with four main sections.

The inner section of the gut is called the mucosa. What do you think makes up the lining of the mucosa? You may have guessed it – mucus! Many people have a negative perception of mucus. This may be because when you’re sick from a cold and blow your nose a coloured slimy gunk (which we know as mucus) is produced which is rather unpleasant to look at. I can tell you however that mucus is a very good thing for the gut. It helps to lubricate the surface of the gut and can serves as a protective barrier against a highly acidic environment such as the stomach. And very importantly it serves as a protective barrier against microbes.

A lot of mucus is produced by the mucosa’s innermost lining of cells known as the epithelium. These are the cells that are in contact with food. They’re also cells that are constantly shed and replaced similar to skin cells. Gut epithelial cells are in fact the most regenerative cells of the body and get fully replaced every 5 to 7 days. 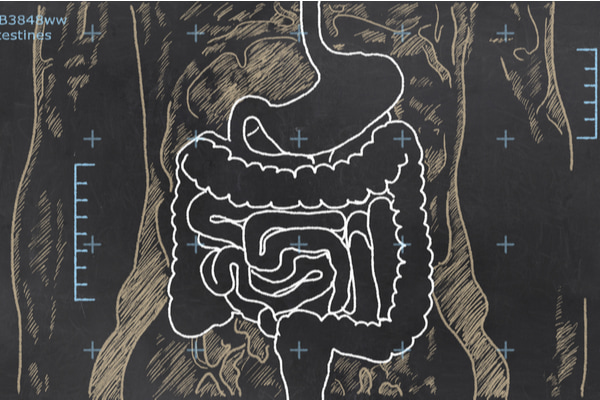 The next section of the gut outside the mucosa is the submucosa and has a lot of connective tissue and vessels. A network of nerves called the submucosal plexus is also contained here.

The third section is the muscularis and this has 2 layers of muscle separated by an important network of nerves known as the myenteric plexus. The myenteric plexus is the major nerve supply to the gut and controls its movement or motility. Peristalsis is the major form of motility and is a series of wave-like muscle contractions that moves food along the gut.

Some of my patients describe passing bowel motions very shortly after eating and often believe that this is the food they’ve just eaten rushing through their gut and out. I will reassure them that it is not the food that they’ve just eaten that is coming out. Food in the stomach causing stretch along with breakdown products in the small intestine causes an increase in the motility of the colon and this is the action of the gastro-colic reflex. This reflex has helped to move poo that was already sitting in their colon out. The gastro-colic reflex also helps to make room for food in the stomach. Interestingly an active gastro-colic reflex and fast gastric emptying is thought to be the secret behind champion hot-dog eaters, some of whom appear quite lean.

The enteric nervous system like the central nervous system uses more than 30 neurotransmitters in its information signalling. Serotonin which is an important regulator of mood and dopamine which is involved in reward-motivated behaviour are 2 good examples of neurotransmitters. More than 90% of the body’s serotonin and 50% of the body’s dopamine is produced by the gut.

The final outer section of the gut is the serosa and represents its outermost coat.

The main function of the gut is to break food down into nutrients (called digestion), which can then be absorbed into the body to provide energy. The structure of the gut has been most cleverly designed to facilitate its main function. I will draw your attention to the diagram of the gut created by the talented Mariana Ruiz, also known as the Lady of Hats (Figure 2).

Food enters the gut through the mouth. The teeth chew and chop food into smaller parts. The tongue is able to fashion a small ball from the food called a food bolus in conjunction with the teeth. Saliva is mixed into the food bolus through secretion by salivary glands and helps moisten it. This secretion of saliva is triggered in response to the taste, smell or even appearance of delectable delights. A morsel literally becomes mouth-watering. There is an enzyme amylase found in saliva that begins the process of digestion of complex carbohydrates. Saliva also contains some special proteins called immunoglobulins that can help fight off microorganisms.

What is to stop food from going down into the lungs every time we eat? The answer is a little flap of cartilage called the epiglottis which is located just behind the tongue. During swallowing the normally upright position of the epiglottis changes to a horizontal one that seals over and protects the airways. 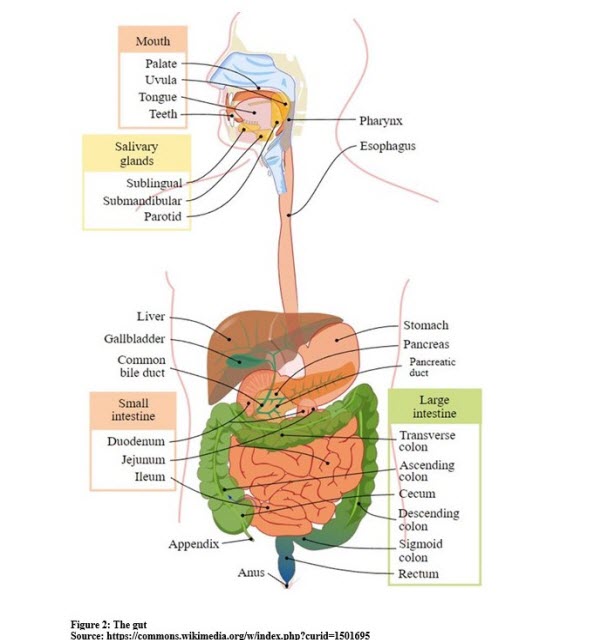 The food bolus enters the oesophagus after passing through the back of the throat (pharynx). It is a muscular tube with most of it made up of smooth muscle for which we have no conscious control over. Peristalsis is the key action that propels the food bolus down into the stomach. Ordinarily the force of peristalsis is quite strong so you could eat an apple upside down and the food boluses generated would propel themselves up the oesophagus against gravity into the stomach.

Now I personally wouldn’t recommend sword swallowing but I do admire the bravery and dedication of those who practice it. It is a craft that takes years to practice. Performers have to learn to align a sword with the upper oesophageal sphincter with the neck hyper-extended. The next step is to consciously relax the muscle fibres of the upper oesophageal sphincter. They then have the difficult task of controlling retching while the sword is gently guided down the oesophagus into the stomach.

After food passes the oesophagus it enters the J shaped stomach. The top of the stomach known as the fundus is able to stretch and accommodate food. As it does gastric juice is created which contains an enzyme called pepsin that can break down proteins as well as hydrochloric acid and mucus. The highly acidic nature of gastric juice is able to kill off many harmful bacteria and parasites. The gastric juice mixes with the food to create a semi-liquid substance called chyme.

The bottom part of the stomach known as the antrum can be thought of as a strong blender and facilitates mixing and churning of the chyme until the particle sizes are usually less than 3mm. This allows for easy passage of the chyme to enter the small bowel. 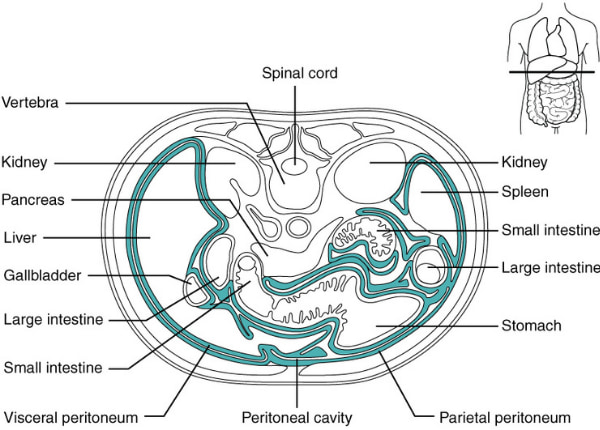 The body has some great feedback mechanisms to turn off biological processes should they become too active. One such important feedback mechanism is the enterogastric reflex. As the acidic chyme enters the first part of the small intestine (known as the duodenum) the acid production in the stomach is turned off by this reflex and gastric emptying also slows down.

If sustained gastric emptying is too slow however this can be a real problem. This is a medical condition called gastroparesis which means paralysis of the stomach. Sometimes gastroparesis can be due to diabetes or as a rare complication of major upper abdominal surgery.

It can also happen with no apparent cause. Sufferers will often complain of constant nausea, vomiting and a sense of feeling very full even with small quantities of food. This condition disproportionately affects young women and very often they are misdiagnosed as having an eating disorder.

Remember when we talked earlier about the great amount of folding going on in the gut? The small intestine is the very virtuoso of folding. There are multiple folds lining the small bowel and these are called plicae circulares which is Latin for circular fold. Each plica has numerous villi on it which are finger-like projections. And each villus has on it multiple microvilli. Such meticulous folding upon folding increases the surface area for absorption in the small intestine by several hundred times.

You need a certain length of small intestine to remain alive. You can survive perfectly fine without the large intestine but you can’t live without a small intestine. I have looked after patients who have a condition called short gut syndrome. Their gut is short for different reasons such as losing a lot of it to major surgery, being born with a short gut or having a lot of their gut die off because of diseases such as necrotising enterocolitis. Necrotising enterocolitis is very rare and typically occurs in premature newborns. Sections of bowel tissue just die off. 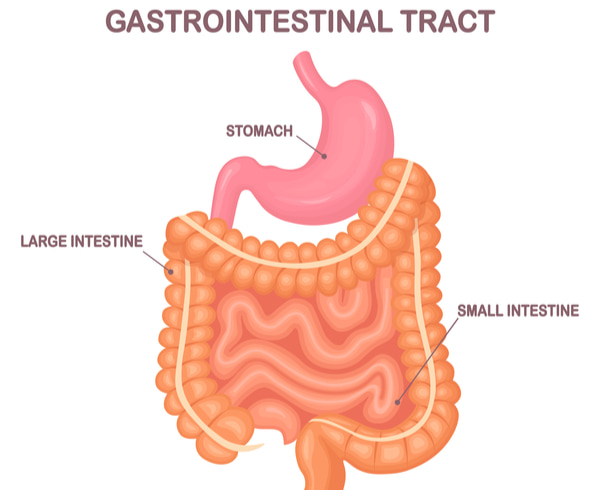 For an average adult we know that if there is less than 1 metre of small intestine remaining they can survive only through nutrition administered through a drip (known as total parenteral nutrition or TPN). People can be on TPN for years but this can be quite challenging due to the risk of serious complications such as life-threatening infections.

The large intestine or colon is a horse-shoe shaped structure that is approximately 1.5 metres long in the average adult. The colon plays a key role in reabsorbing excess water. It also contains many bacteria that are responsible for both the formation of intestinal gas and providing nutrients to the cells lining the colon. The colon accumulates all the unabsorbed material in the gut to make poo.

As a gastroenterologist I know the colon well. We’re fortunate to have a way of accessing the colon through a colonoscope – a flexible fibre-optic instrument that is able to examine the inside of the colon in detail. There are so many interesting findings that we may see at colonoscopy including polyps, diverticulae (pockets in the wall of the colon), inflammation of the bowel wall, haemorrhoids and on the rare occasion tumours. No two colons are alike and every time I carry out a colonoscopy I look forward to what I might discover. This might gross some people out but the bowel is usually pretty clean by the time it’s ready for a colonoscopy thanks to the effects of bowel preparation drink.

I will quickly finish by mentioning the liver, gallbladder and pancreas. These are typically not thought of as part of the ‘gut’ but are very important organs in the gastrointestinal system. The liver has an important detoxifying function and can also synthesise some important proteins such as blood clotting factors. In digestion however its main roles are to produce bile and metabolise (chemically transform) nutrients. Bile acids are good at breaking down fats into smaller particles for better absorption. After being produced from the liver bile acids are stored in the gallbladder until they are needed. They are released from the gallbladder in response to hormone signals in the duodenum triggered by food. The pancreas also responds to these hormone signals by releasing fluid rich in carbohydrates and inactive enzymes. The enzymes become active when they reach the duodenum and are powerful enough to break down proteins.